Before baseball season, I shared my favorite baseball books and I decided to share my favorite football books. One thing I have found out is that I like some of the older books in my collection more than the newer ones:


Super Bowl (right) by John Devaney has been one of my favorite football books for many years. It was written in 1971 and covers the first five Super Bowls. I think I read it for the first time when I was in about third or fourth grade, but I still like reading it everytime the Super Bowl comes around. Devaney does a great job of getting the flavor of the early Super Bowl era.


I know I am going really old school here, but about a year ago I was at an estate sale and saw these two books sitting there. It was the last day of the estate sale and I think I got them for about a dollar each. The First 50 Years  (on left) is about the first 50 years of the NFL and The Other League is about the AFL. These books came out right after the 1970 merger. I love the photography in the books and all of the old school in them:


Speaking of the AFL, I am a huge fan of it. I guess it is the rebel in me, I have a quite a few books on it and The Little League That Could by Ken Rapporport does a great job in going into the history of that league and how it stayed a alive during the lean years and then started to flourish and became the most exciting league at that time and forced a merger with the older the NFL.

Being a kid in the 70's, the Raiders were the dominate team in the Bay Area and one of the most entertaining off the field. Madden by Bryan Burwell is the best book about the leader of those great teams John Madden. Burwell really does really great job in getting inside of Madden. Badasses by Peter Richmond does a great job in getting into that Raider culture of those teams that created those great Raider teams of the 70's. No team will be as crazy on and off the field as those teams 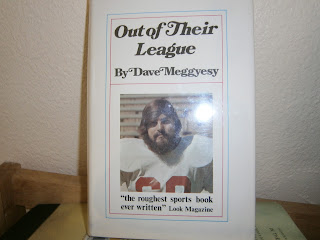 Out of Their League by Dave Meggyesy was the first book that taught me that football was a true business. The book is written anti-establishment rhetoric of the 1960's. Meggyesy does a great job of laying out the NFL of that time. I was lucky to find a first edition copy with the dust jacket on it (left). 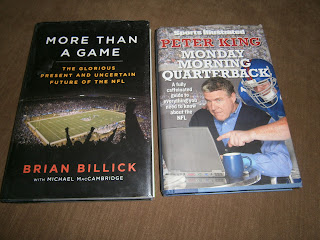 As great as Meggysey's book is,it was written 40 years ago and the game as changed.  More Than a Game by Brian Billick (left)  and Monday Morning Quarterback (right) by Peter King do a great job of laying of the modern NFL. Billick takes the game's issues and lays them out for you. King takes his great SI.com column and expands on it. 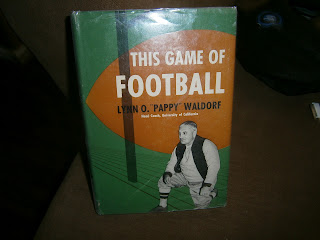 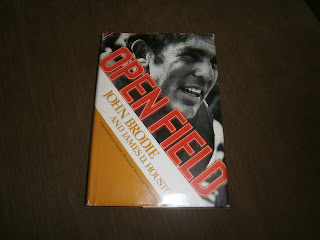 When looking at the game's history, this book is great. This Game of Football (left) by the great Cal coach Lynn "Pappy" Waldorf goes into the strategy of the game back in the day. He has diagrams of plays and discusses each one. He also goes into the philosophy  of the day. I love reading about how the great minds in the sport thought. Again, I was lucky to find one in great condition and with the dust jacket on it.

Even though I have many more to share, I will leave with this. John Brodie's Open Field. Being a Niner fan, I like this book and think he should be the Pro Football Hall of Fame. Again, I found this book in great condition (at a library sale) with the dust cover on. Also when I opened it up, it had a special surprise inside his autograph: