The kiddos and I have bought some used lots of old baseball cards to be sent out and hopefully signed. I mentioned this in earlier post. We also sent out some index cards to other folks to see if they would sign and return them. Well, it has been slow, but we have got a couple of things back:

Hopefully, we will get some more things back in the coming weeks and we will share our successes.
Posted by csuhpat1 at 11:18 AM No comments: 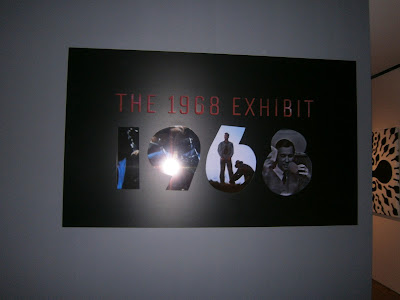 1968 was one of the defining years in American history, the Oakland Museum, as they do, put on a great exhibit of that year with really cool artifacts. They looked at the social, political and economic events of that year. I was born in 1969 and missed all of the fun of that year.

1968 was a year of violence, from the assassinations of Dr.Martin Luther King and Sen. Robert Kennedy to the riots at the Democratic National Convention in Chicago.

1968 was also a year of protest against unjust conditions both locally (the Black Panthers) and internationally (Tommie Smith/John Carlos at the 1968 Mexico City Olympics):

It was also a year that (sadly) The Vietnam War hit its peak. This exhibit does a great job exploring Vietnam without choosing a political side. The voices that lived through it and it lets you make your own choice about how you feel about the war.

But even with all of the turmoil that went on that year it was a good year for Oakland's NFL team and it was a groovy year for style.

Even with the chaos of the year, 1968 was a year that we went a step closer to going to the moon as Apollo 8 became the first manned space craft to leave Earth's orbit, orbit the Moon and return safely to Earth.

Inside the Oakland Museum


As a great as walking around the grounds of the Oakland Museum is, the inside is even better. One thing about the Oakland Museum is that it is since it opened in 1969, it has been "a Museum for the People" and tells the story of California is a wonderful way. The Museum wants the public to give their ideas on how to represent the continuing story of this state. The Museum is always trying to find a way to highlight the great artists of this state.


One thing I like about the place is that highlight artists on all races, creeds, genders and backgrounds. I like looking at paintings but I really like sculptures and things that people create from different things. I am not saying that painting is not creative, but I like other mediums being used:


In art part of the Oakland Museum, this has always been my favorite:

Besides having wonderful art by Californians, it has a great history section that tells the story of California. If person was in 4th grade from about 1970 to the current day and within a hundred miles of the Oakland Museum then most likely they have been on a field trip to the Oakland Museum. As they do a great job in telling the story of this state from the Native Americans to the current day with a lot of interactive displays:

I know it seems like I am showing just cars, but the car culture is what help made California and so did the movies.


California has great art and history and the Oakland Museum shows it off very nicely.

The Oakland Museum is a gem that many people don't know about. I have been going there for years. I love the place. It is a wonderful place and has many great exhibits and programs. I went there on Sunday and had a blast. I am going to break this up in four or five different blogs as they had a couple of great exhibits going on and I want to highlight everything.

One thing about the Museum is that it has a bunch of great things. It caters to all.

Its grounds are beautiful to stroll through:

Besides all of the nature they have a lot of art sculptures around on the grounds which really makes you want to walk around on a nice day.

This is just the outside in which you can spend a lot of time walking around. To be continued with the inside.
Posted by csuhpat1 at 2:39 PM 2 comments:

Here are a couple of views of O.Co Coliseum that I took on Saturday: