Where The Cool People Go-Union Square

I am not a big shopper. I usually wait for the deals at Old Navy-lol (I do go to Macy's and have some designer duds but....), but the other day I was around Union Square in San Francisco and saw all the chic people walking around and decided to snap some pics:

The hard thing was trying not to take pics of the street because that would kill any vibe as they are tearing up the street around there, trying to put in a central subway. So that is why the pics are looking up and also all of the stores around there are at least two stories.

And after the hip, cool and rich get done shopping I am pretty sure they head over to the Olympic Club Building which is nearby. It is members only, so I could not get in but the outside is pretty cool:

Maybe one day I will be hip, chic and cool enough to start hanging out more in these places instead of walking around-lol
Posted by csuhpat1 at 4:47 PM No comments:

Every so-often I have a bunch of pics that I have just taken and do not really fit into anything or I left them out of a blog because they did not fit. So, here just some random stuff:

I have a bunch more "random pics", but I am going to end it with one of my favorite things I own. It was given to me years ago by a sweet old lady and I love it. It is a signed Billie Holiday album. She was a coat check girl in a club  back in the 40's and asked Billie to sign it and she did:

So much to blog about as I have been out and about and taking a lot of pics. Just need to write about it.

Anyway, when I was at the Museo Italo Americano at Fort Mason I saw that they had a lot of old Pacific Coast League (PCL). The old PCL is something that I have really tried to know more about as it was a great league before the San Francisco Giants and the Los Angeles Dodgers came out west in 1958.

The PCL had its own culture and a lot of players would rather stay in the PCL then go the Majors as they were paid better and closer to home. But a lot of players from the PCL did go on to Majors including Hall of Famers:  Joe DiMaggio, Ted Williams, Bobby Doerr, Paul Waner, Tony Lazzeri, Earl Averill and Ernie Lombardi.

Here is just a little of what the Museo had (It is mostly Oakland Oaks and San Francisco Seals things): 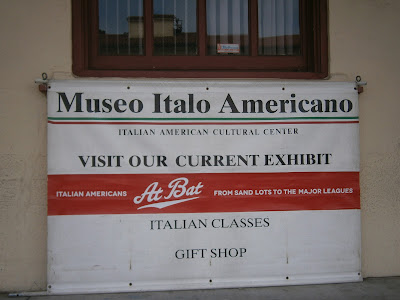 When I was down at Fort Mason, I saw a place called Museo Italo Americano and saw that they had an exhibit called At Bay-The history of Italian Americans in baseball. Being the baseball nut that I am, it was free and I decided to check it out. Man, it was cool. They did such a great job presenting on how Italians have shaped and become part of fabric of the game. It is one of those things where I need to come back and see it again just to get the scope of it, since they did such a great job:


The Bay Area has produced many Italian big league heroes, but one family stands above all others and that is the DiMaggio's:

And they do a great job of weaving the current day into the exhibit:

So if you want to learn a little more about baseball-The Italian Way, catch the exhibit at the Museo Italo Americano at Fort Mason, it is well worth it.
Posted by csuhpat1 at 7:45 AM No comments: 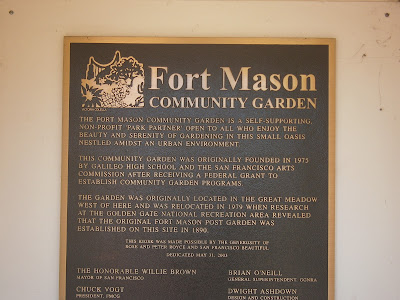 When going places, I tend to go off the beaten path and "not follow the plan". Well, the other day I was headed down to Fort Mason to get some info (for another blog) and was walking around and I came upon a beautiful area called the Fort Mason Community Garden. The Garden is located inside Fort Mason (which is inside the Golden Gate National Recreation Area-a national park), but  anyway it has been there for over thirty years. What is really cool is that today's garden is at the same spot as the original Fort Mason post garden in 1890. So, this goes back to when it was an important Army base. Now that is pretty cool.

The garden itself is self-supporting and maintained by members and volunteers. They do a great job in doing it. There are a 125 plots and there is an eight-year waiting list to get your own 20x5 ft plot. They are organic which is cool. And all of them are very beautiful to look at: 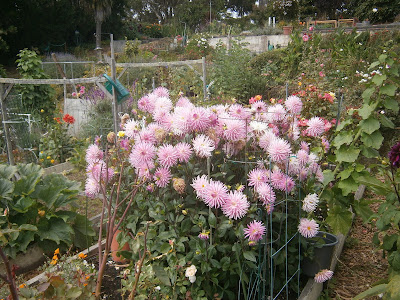 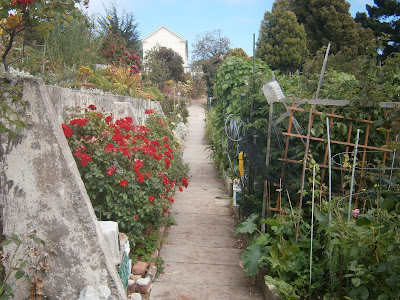 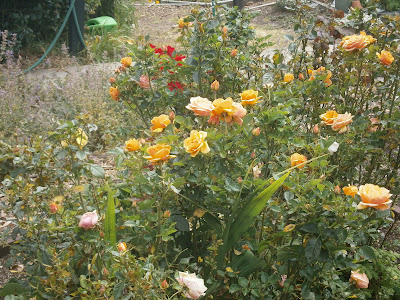 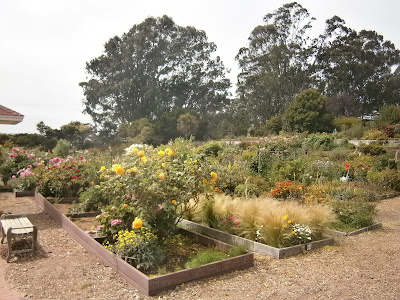 So, if you are ever at Fort Mason head by there and take a look. You will not be disappointed.
Posted by csuhpat1 at 12:40 PM No comments:

I do like books a lot that is no secret. One of my favorite bookstores is Book Bay Fort Mason in San Francisco. It is located in one of the most beautiful parts of the city with some of the greatest views of the Bay. I love the place. Book Bay is run by the Friends of San Francisco Public Library, so when you buy a used book there you are helping out the library as well. It is a win-win deal.

I like the place. It is very clean and well organized. You can easily find the section or type of book you want. Another thing that is cool is that it has a lot of open space so you do not feel cramped:

You can buy books, old magazines, records, CD's, DVD's, etc there. And they do have some of the coolest things that people have donated to be sold all at good prices:

Another cool thing is that after you browse for a while you can head to the cafe inside of the place and enjoy a beverage while you take a look at your purchase:

And that even have a couple of chairs inside the store to relax in:

On this day I only made one purchase, but it was too cool as it was autographed by the author Terry Pluto, who is a great sports columnist for the Cleveland Plain Dealer:

Book Bay Fort Mason-go for the priceless views around Fort Mason and go for the great books that they have.
Posted by csuhpat1 at 11:14 PM No comments: