A Different Set of People

It is a rainy Saturday and I am sitting here writing this. Who really cares, but anyway....Two things stand out:

1) When I wrote yesterday, I kept on spelling Haight St. wrong. I kept spelling it Height, when it is Haight St. even though my dumb butt put a picture up that had the correct spelling-duh!

2) Sometimes coming up with a catchy title is hard. A catchy title is a way to draw people into reading this prose that I post. But I guess what I write and other things are most important. 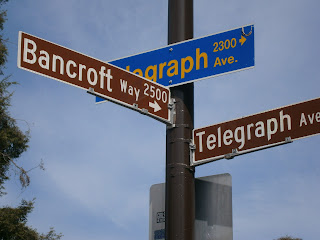 Yesterday, I headed out to Berkeley and Telegraph Ave. It was a nice day and I haven't been out there for a while. Sometimes I just need to walk around and see what it going on in one of the most interesting places on the planet. Telegraph and Bancroft is at the entrance at the University of California at Berkeley or where a lot of the 1960's happen. The cool thing is that Telegraph still has a lot of the 60's still there. With the different street vendors and such. Like most things, it has gone corporate. It has an American Apparel, Hot Topic and other so-called places of the 2000's, but it still has the cool vibe of the 1960's there. 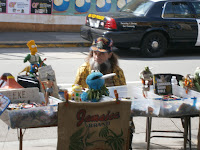 As, I said I like the walking around because you will never know what you will encounter with the street vendors: As you can see from this guy as he suggests how Cookie Monster gets the munchies. He is a fixture on Telegraph, selling his hemp made products and such. 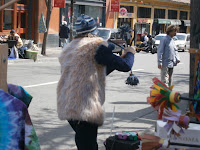 Or this dude, who was trying to trying to sell his tye-dye products while doing some cool juggling. He had some nice stuff, but every time I tried to take a pic of him he turned away and I guess he did not want any free press or free advertising. My thinking is that he thinks I am some kind of narc or cop who was taking pictures to bust him one day. 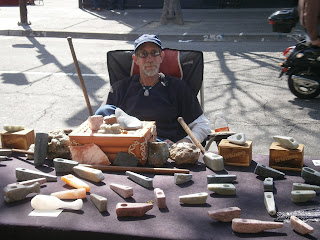 But most vendors are cool. I like D.B. Sammon who is a sculptor and jeweler who makes some nice pieces. He makes everything from necklaces to pipes to sculptures from stone. He makes some really cool stuff. He just asked for some "ink".

One person I missed yesterday was my friend Russell who has been selling his stuff on Telegraph for at least 20 years. He sells homemade pottery. I guess he decided to take the take off. 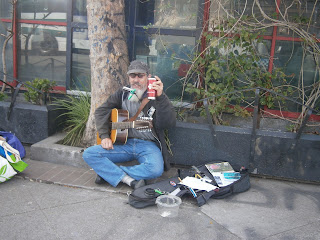 Another thing on Telegraph are the street performs. Who knows why they are out there? They could be down on there luck or like this gentleman to my left. He says he has a job and was off so he came down to Telegraph to make an extra buck or two. Look at his bowl and I guess he was not having a good day. 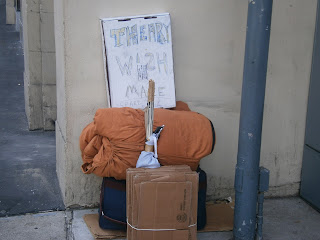 One of the said things about Telegraph is that there are number of homeless who are panhandling on the streets. Most of them are homeless and have a drug and alcohol problems. Some have been on the street for years. Some are runaways. It is a sad situation that needs to be dealt with. Hopefully, this person is okay as their stuff was just left in the corner. 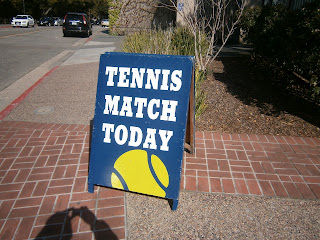 As I left Telegraph, I decided to take a short cut through Cal. I down a service road that takes me right past the Water Polo Center, Haas Pavilion, Evans Diamond and the Hellman Tennis Complex. Cal had a match vs. Sacramento State. The thing that is cool is that Cal is a world class university and plays big time sports and this all the advertising they do for a match. I sat down for a couple since it was free and enjoyed a tennis match featuring the defending D-I NCAA women's champion: Jana Juricova.

Telegraph Ave in Berkeley has it all. It is truly a different set of people that spend their day on it is streets on a daily basis.
Posted by csuhpat1 at 1:49 PM