GSW -It is a Great Time Out. 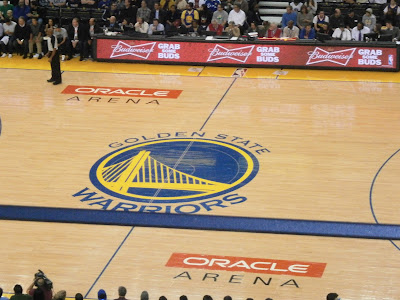 Had some fun and went to the Golden St. Warriors game tonight. They were playing the New Orleans Hornets. When I go basketball games, it is usually college, mostly women's games (Go Cal Bears). I haven't been to a Warriors game is a long time, even though I am a big fan of theirs for over 35 years. It just seems like things get in the way of going to the game. Plus, I enjoy listening to the game on KNBR-680 with Tim Roye doing the play by play or watching on CSN Bay Area and listening to the best team in basketball-Bob Fitzgerald and Jim Barnett.

Tonight I got a deal on some tickets ($18) for some pretty good seats. I was pretty pleased. Getting into Oracle Arena was interesting as it was almost like going into an airport. They do not allow backpacks into the Oracle and you had to take everything out of your pockets and go through a metal detector. Which was interesting. But I guess in this day and age, you have to do that.

As I said I go to many college basketball games and I have never seen the amount of high heels as I did at the Warriors. Now, that was a show in itself. 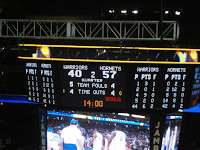 As for the game itself, it wasn't much of a game. You can see the halftime score with the Hornets boatracing the Warriors. The W's ended up losing by 15. But they did give out some really cool rally towels. I guess it was suppose to be given out to the first 15,000 fans, but somehow I ended up with two(below). It was a Great Time Out and I will be back at Oracle. 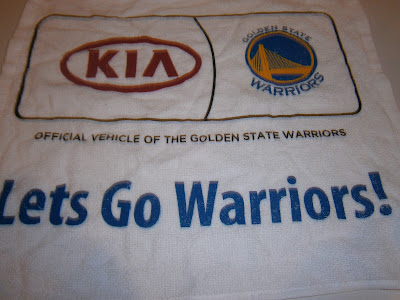