I have loved the game of baseball since I can remember. There always is a rhythm to the game and a season. I try to go to as many games as I can. Either Cal, Stockton, Sacramento, Modesto, San Jose, Oakland or San Francisco. Even when I am on vacation the first thing I always ask is where is the nearest ballpark.

I have been very lucky that I have been to many ballparks across the United States in my travels. From historic Grayson Stadium-Home of the Class A Savannah Sand Gants to the modern Aces Ballpark-home of the Triple A Reno Aces. It is amazing how every time I go to a ballpark the same sense of excitement comes over me. It is like a new story is being written every game and you are a part of it. I hope that feeling never goes away.

One thing about going to a lot of games is that you tend to collect a lot of stuff. I am not a collector per se, but I have a lot of junk. I used to have a lot more, but some jerks broke into a storage unit I had and stole a lot. I guess that was a good thing as it means I can collect more and have the space for it.

I do have a lot of autographs (I will deal with that later), but it is the some of items I still retained that I wanted to share. 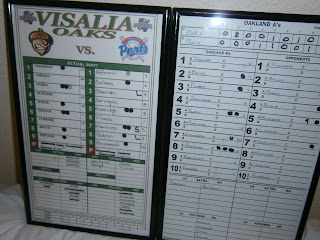 These are lineup cards that are from two different Class A Visalia Oaks-Stockton Ports games that I went to. I must have twenty or thirty lineup cards from different Class A games and college games. I have found out that it easier to obtain these items right after the game. It is funny, I usually head down to the dugout right as the game is ending. Many kids are asking for bats, balls, gloves, etc and are ignored. I ask for the lineup card and they always give it to me. It is something nice to take away from the game. 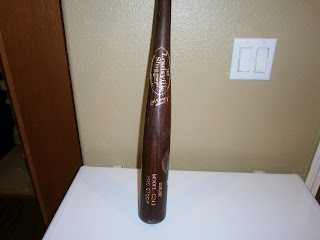 One of cooler things that I got at a game was this bat (right), I was at the San Jose Giants game in 2009 and I was looking for a lineup card and Conor Gillaspie handed over his bat. He just said "Here". That was pretty big time. I know that he has only been up with the Giants here and there over his career, but I will root for him where ever he goes. 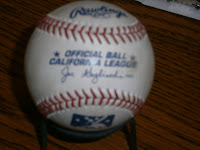 As for balls, I have only caught one at a major league game, but a bunch at minor league games. To the left is a California League ball. I have balls from the Southern League, Pacific Coast League and this one below from the then Pac-10 Conference from a Cal game. 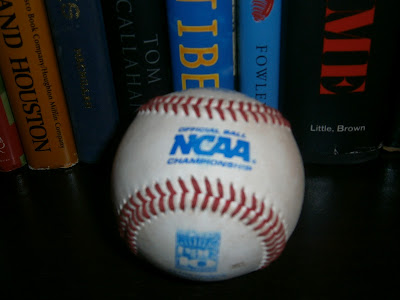 As for hats I own many. I have a rule if I think it is cool and unique then I will get it. I own hats from many teams but I think my favorite is one that I ordered on-line. It is the hat of the Sydney Blue Sox (below) of the Australian Baseball League. And yes I do follow them on-line and have become a big fan of them. 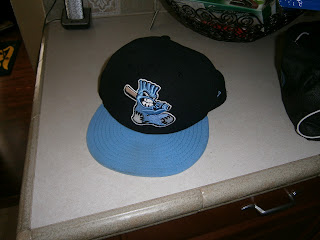 Well, tomorrow I am heading out to AT&T Park in San Francisco to watch the University of San Diego play USF. I have been to AT&T for many Giants games, but never a college game. It should be interesting and hopefully I can add to my little collection. As I said every game is a new story waiting to be told.
Posted by csuhpat1 at 7:34 PM