Yesterday, I went out to AT&T Park to see the Giants play their season opener on the big screen. The event was free, but they had VIP access you could get with a $20 donation to The Guardsmen. Normally, I would mingle with the common folk, but I decided to spurge and spend the $20. I am glad I did.

Besides getting into the club level at the park, we got to roam the field which was very cool. AT&T Park one of the most beautiful ballparks in the nation. It has many different quirks to it. Walking around the warning track dirt. You got to see many of the different features that the players get to see as they are playing. It is amazing to look at and walk around AT&T Park from the field.  will post those later by themselves.


One of the things was that I was able to get special benefits. One was getting on the club level and getting to walk around. The Giants have a lot of there. Autograph balls, bats, all the bobbleheads, etc. You could literally spend hours walking around and seeing Giants history. One of the cool things about yesterday was getting a shot with the 2010 Commissioners trophy. It was really cool being able to be near it. Their photographer took the photo and printed it out, but I quickly took one of the trophy. We also got see up close the 2010 Championship Ring (below), it was under glass.


Walking around the club level at AT&T Park you can see all the little details that make AT&T special. They have original art work all through out the stadium on the walls. It is all baseball themed, but it is all huge and nice to look at. Also on the walls on the stadium are all of the great quotes from the game of baseball. If you are any kind of baseball fan, then you will want get to the park early, just to see the artwork and the quotes.


But I must say that highlight on the day (besides having all access to the park) was getting to meet 49er legend Jerry Rice. He was there to promote the PGA Nationwide Tour event in Hayward (ca) next week. I was wondering around the club level and he supposed to be there like at 3:00pm and it was like 3:50 and I literally bumped into him. Now, that was cool. Jerry was very kind and gracious to everybody. He signed a Nationwide Tour/TPC Stonebrae event poster for me, right above his picture. That is big time. I also got a weeklong pass to the Nationwide Tour event in Hayward. Pretty cool deal.


Even though the Giants lost their opener down in Arizona, I think that all the fans that attended The Comcast Authentic Giants Opener at AT&T Park had a great time. I know I did. I also found out that Snoopy is a Giants fan (below). 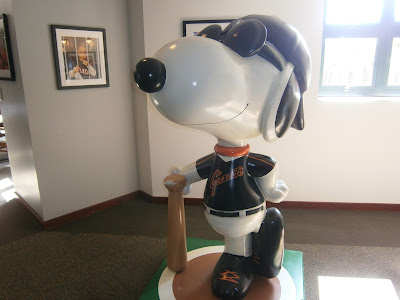