Walking around and looking around is always fun. The other day I had to down by City Hall in San Francisco and had a stroll in what is called The Plaza which is the huge area across from City Hall. It was a beautiful day in the City and walking around I saw a bunch of different dramas playing out.

﻿﻿﻿﻿﻿﻿﻿﻿﻿﻿﻿﻿
With this being San Francisco and everything. I saw that the Occupy SF movement was about to have a big protest and everything on the steps of City Hall. As I walked by they were getting the signs ready and had a podium and microphones out for the speeches. It was like the 1960's all over again. i walked by and took a picture, the protesters asked if I was the media. When I answered that I was just walking by, they became very disappointed. Oh well. 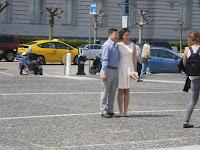 San Francisco City Hall is a favorite place for people to get married. In 2004, it became the epi-center for the gay marriages as then Mayor Gavin Newsom had the city clerk issue marriage licenses to same sex couples. Even though that has passed, many people still get married inside City Hall. This couple was taking post wedding pictures in the plaza. 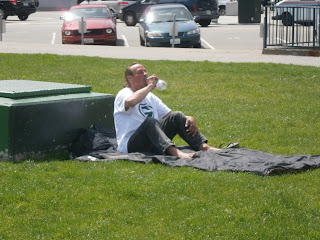 ﻿﻿﻿﻿﻿﻿﻿﻿﻿﻿
Hanging out in the plaza is a huge pastime. Many people have lunch there, sit and talk, read their books. There is a pretty-good size playground for kids to use. This guy has it all going on, his blanket, the shoes off and drinking a bottle of water. Sleeping is another pastime that many people do. Take a nap on soft green grass. It seems dangerous to me, but to some there is nothing better than dozing off on grass and under the sun. 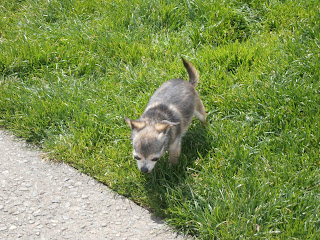 Many people bring their dogs out and have fun with them. This guys owner was trying to get him to chase a tennis ball. As I stopped and took a pic, he seemed more interested in me. He was a cute little thing. You would think that have a bunch dogs would mean a lot of dog stuff. But San Francisco has some serious fines for leaving the dog stuff. People kind clean up after their pets. Which is a nice thing.

There are probably more things going in The Plaza across from City Hall in San Francisco. I guess every time I walk though it, I will keep my eyes open for new dramas
﻿﻿
﻿﻿﻿﻿
﻿
﻿
Posted by csuhpat1 at 1:43 PM