A couple of weeks ago I was walking around and stumbled upon a garage sale in my neighborhood. I took a look and saw these old football books and I asked how much. The lady said she was going to throw them away. I said I give you two dollars for the books. She agreed and I saved these great books from the dumpster:

And this one is my favorite: 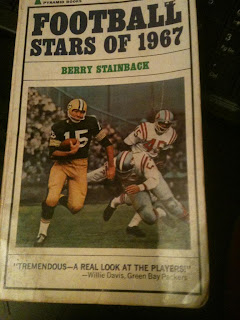 The reason I love it is that it describes some of the chaos of the 1966 season for both the NFL and AFL as the merger was announced in June and they played Super Bowl I six months later.

Hopefully, I can find another batch of old books that need to be saved.
Posted by csuhpat1 at 7:35 AM