What Have I Done This Year

This time of year is a time of refection for me. I take a look at what I done for the greater good for the world at large. I guess it is because the so-called holiday season as been a mixed bag for me. Growing up I really did not have anything and that that first day back to school was always a drag knowing that I had to make something up because my mom did not have any money to buy me any presents and did not believe in giving me any. When I was married to kiddo's mother, the holiday season was a really strange time. I dreaded to going to her family's deals. I was put off by the fakeness of the backslapping and such. If you do not talk to me all throughout the year then because it is the holiday's, you are going to talk to me. I do not think so.

I guess I have found a balance as I am getting older. I try to be myself and enjoy it is for what it is. Watching my own two grow up, I haven't put any of the head trips on them, that were put on me. I am happy that they know and understand the words to "Do They Know It's Christmas" and know that they have a pretty decent life compared to a lot of people. 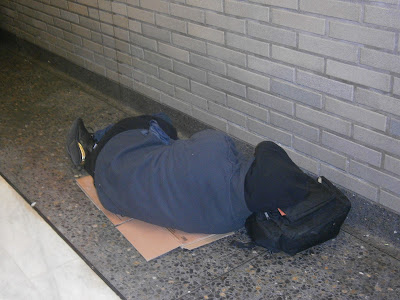 So, at this time of year I try to think of things I have done to help people. Maybe giving a sandwich or a food item to a homeless person, paying the bus fare of somebody who does not have the fare, giving an extra BART ticket to somebody who needs one, listening to somebody in their time of crisis, donating clothes that I do not wear to a shelter, giving a coat to the One Warm Coat Drive. Stuff like that. Even though I try to do that stuff all through out the year, I feel that I sometimes do not to enough. I do not know. I guess that doing something "However Small" is better than doing nothing at all.

I guess I will try harder to help mankind in my ways and I give a little more spare change to causes that help mankind. It is the least I can do.
Posted by csuhpat1 at 6:35 PM