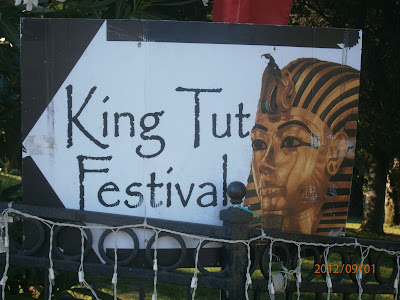 Busy weekend. On Saturday, I was looking at something and saw an ad online for something called the King Tut Festival in Hayward. Looked it up and it was about 15 minutes away. So, I took the kiddos for some Egyptian culture. One thing I learned is that they had a great food. The festival was held at St.Antonius Coptic Orthodox Church. I had never heard of this branch of Christianity and again it was another learning experience. The inside of the church was beautiful:

They were showing different movies on the history of Egypt and about the Coptic faith. I am just sorry that I missed the church tour. I would have liked to learned more.

But the highlight of the festival was the food. I was walking around and ran into a couple who's son I grew up with. I haven't seen them for about 15 years or so and it was nice to see them and they told me that food was out of this world and it was really good:

They also had falafel, stuffed grape leaves and gyros. But highlight for my taste buds was a thing called the Chamaut (hope my notes are right) which was beef, onion, tomato, garlic and green pepper baked into a pita bread shell. Man, it was good:

As for the festival, it was my first time ever there and I would go back just for the great food.
Posted by csuhpat1 at 8:00 AM